On Friday, February 16th, 2018, at the 1867 Bar in Lincoln, NE, all hell is going to break loose. Hometown heroes Violent Death Equipment will be taking the stage to celebrate the release of their new self-titled record. If you like brutal death metal, not to be confused with black metal, then you’re in for a ride to headbanger heaven.

I have been listening to their previous material on their ReverbNation page and it’s some good stuff. Lots of grooves, lots of riffs, and a beat you can stomp your feet to. The vocals are enough to give Cookie Monster a run for his money… and I happen to like the Cookie Monster as a metal frontman. The vocals are straight from the gut of hell and that’s how death metal should sound!!! 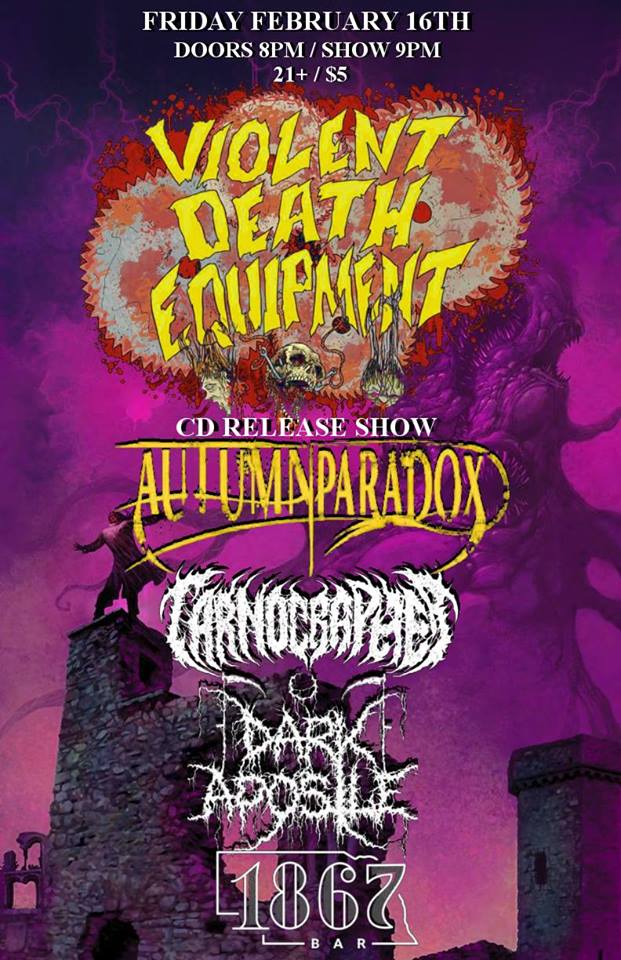 The band has brought some friends, because who celebrates without friends? Those friends include… Autumn Paradox, Carnographer, and Dark Apostle. You put this lineup together and you have one heavy brutal ass metal show that will not disappoint. Check out the music player below to hear some of Violent Death Equipment’s previous material.

All the glorious details can be found via the official Facebook event page. Looks like you better leave the minors at home for this one, it’s a 21+ show. Make sure you bring $5 for the door and if that’s too much, you’re a poser haha. Get your pretty little ass to a show!