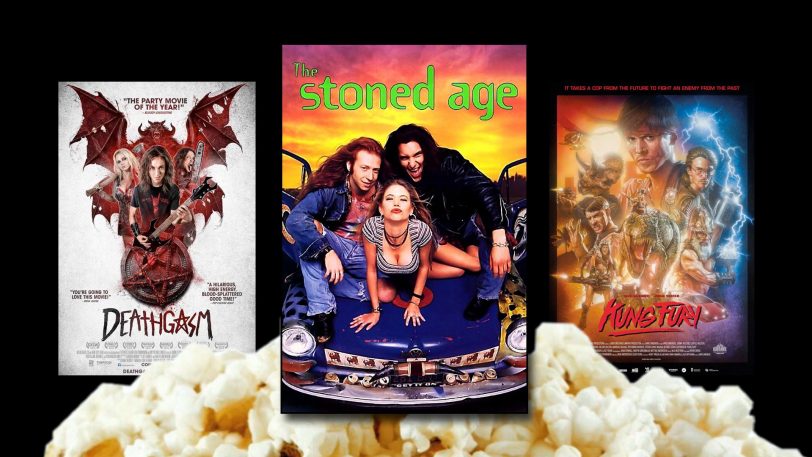 Here at the B.A.C. we get it, times are tough and money is tight. You're bored and need something to do. Well, buckle up buttercup because here is a listing of movies that pay tribute to heavy metal music or are just basically rad as hell anyways.

Without further ado, head to the pawn shop and buy back your Roko TV, grab a tallboy and that 6-month old bag of microwave popcorn out and let's rock.

Deathgasm is a 2015 horror comedy movie written and directed by Jason Lei Howden. The movie is centered around a couple metal heads and their adventures in the town of Graypoint. Or as Brodie referred to it as, "The middle of ass f*** nowhere." The guys start a band, Brodie and Zakk, and from there the adventure begins.

I don't want to ruin the plot, so I'll stop there. Just know, this movie is killer and no filler.

The Stoned Age is an older offering on this list, but make no mistake... the movie is a 1994 classic comedy and still holds it weight in 2022. Think of it as a badass / better version of Dazed And Confused.

Trust me, you'll break a rib laughing way too hard to this classic. Next thing you know, you'll be cruising around in the Blue Torpedo with some OX45 Tallboys ready to party... and don't be no worm, bro.

WHERE TO WATCH
Tubi, Vudu

NOTE: You'll need to be logged into YouTube to watch this movie because of age restriction rules.

This movie is not centered around Heavy Metal music as a theme, but still... it's totally right up your alley. Kung Fury is a 2015 short film by Laser Unicorns and it's amazing from start to finish. Follow Kung Fury, the best cop in the world, as he fights the forces of evil and takes on the worst criminal of all time... Hitler.

If you love old martial arts action movies and just plain rad CG and film editing, you're in for a treat.

This list has been filed with movies about partying and action... well, here is a serious movie for a change of pace. Hesher is a 2010 comedy drama that has an independent feel to it, but features some big names. The movie starts Joseph Gordon-Levitt, Rainn Wilson, Natalie Portman and Devin Brochu.

The plot is centered around a family that lost a loved one in a car accident. While grieving for their loss, they run into Hesher and things start to get interesting quick. By the end, you'll think of Hesher as a sort of messiah savior that brings everyone together and teaches them the meaning of life. The movie is packed with Metallica and Motörhead songs to keep you rocking out while the story unfolds.

WHERE TO WATCH
Tubi (Make sure to check back every so often, this movie comes and goes on streaming services.) I know Netflix costs money, but it's also on there from time to time.

To finish this list off, I have a special treat for you. Heavy Metal fans and Punisher fans go hand and hand, so this selection works with this list. Do you remember back in 2004, the Thomas Jane and John Travolta Punisher movie? Sure you do. The movie had a lot of problems from the start, I remember watching the behind the scenes stuff with director Jonathan Hensleigh. At the time, Hensleigh explained all the production issues along with budget cuts that really hurt the film. Still, it was a cool movie... especially the Pontiac GTO car scenes and the Russian hitman fight.

Fast forward to 2012, Thomas Jane started in an American short film simply titled, "Dirty Laundry". The short film features Jane reprising his role as The Punisher and it's GOOD! I almost like the short film better than the 2004 movie. I won't spoil the plot, the film is ten minutes long... trust me, you're in for a treat.