This spring the greatest American death metal band is going on tour, I’m sure you’ve heard of the mighty Dying Fetus. The band hails from Marlboro, Maryland, and their unique approach to death metal is sick as f$%^. We’re talking hellacious blast beats, super complex guitar riffs that will slam your ass into the ground, and some of the heaviest breakdowns around. My all-time favorite album of theirs is “Descend Into Depravity”… the guitars on that album are so groovy and the drums are at insane blazing speed.

Their latest album titled, “Wrong One To F@#$ With” is pure top-shelf brutality at it’s best. You can find their new album on Relapse Records. Check out the song titled, “Panic Amongst The Herd”, it’s a ripper with badass guitar slides!

Joining the band on tour is co-headliner Thy Art Is Murder. I haven’t really checked them out much, but I’ll be sure to give them a listen on the old Apple Music. 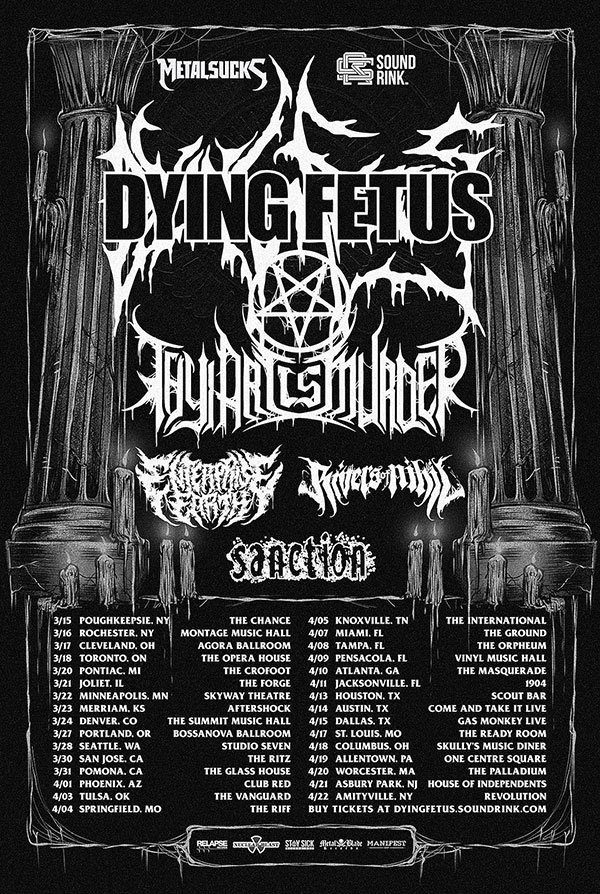 The midwest stops of the tour are Merriam, Kansas, and of course, Denver, Colorado. March 23rd, at the Aftershock in Merriam and the following day March 24th, 2018, at The Summit Music Hall in Denver. Looks like the tour is brought to you by MetalSucks and Sound Rink. For more information check out Dying Fetus’ official Facebook page. Before you go there is a music player below to test your sound system with.