Saturday, May 31st, 2014 it got a little crazy at The Depot/Phoenix Room in Norfolk for the “Day of Havoc Fest”. Five heavy hitting bands took the stage and absolute destroyed every face in the building.

First on the bill was Ghosts of Ruin from Omaha, bringing their style of metalcore prowess to the stage. They started off with high energy and didn’t let up the entire set.

Next up was Norfolk’s own Sin/Fixx, They got the local crowd jumping all over the room with their blend of heavy riffs, pounding groove and insanely intense vocal styling, and ended the set with their cover version of “House of the Rising Sun”.

Up third was the brutally death machine Valiska out of Council Bluffs, Iowa. Killer shredding riffs and machine gun drums and guttural vocals so heavy they shook your soul. Great energy and crowd reaction the entire set.

Following Valiska was hometown grindcore/deathcore four piece Architect or Arsonist. Their great local following reacted on killer instinct as soon as the light went down and the metal fired up, with the crowd smashing up against the stage to get a face full of the madness.

Closing out the show were, as some people consider the godfathers of Norfolk metal, The Blood of War. This was the first show with the bands new official lineup, and they threw down a heavy, in your face set as they are known to do. Even turning the house lights on couldn’t get the band to shut it down as they broke out one final crushing speed track to end the night.

I hung out talking to fans after the show for a bit. Everyone I talked to had a blast, and could barely hear. So I would say, in my opinion, brutal success. 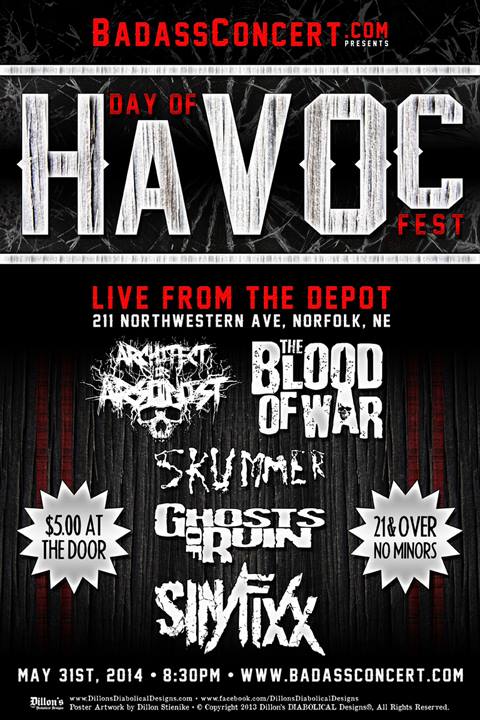 Did someone say let's party? It's time for the METAL!